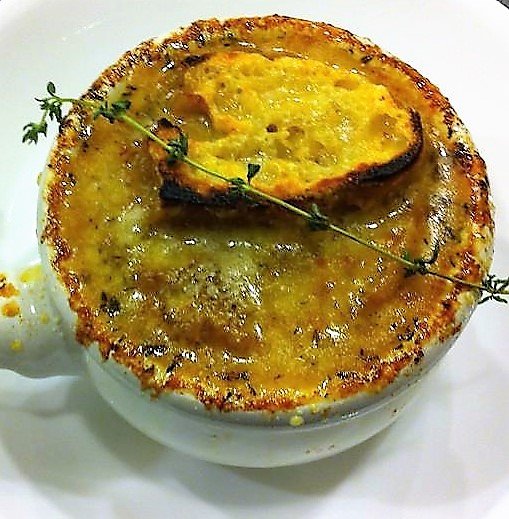 French Onion Soup
Serves 8
1 stick unsalted butter
4 lbs (6-7 large) yellow onions, halved, peeled and sliced ¼ inch thick
2 bay leaves
6 fresh thyme sprigs tied with kitchen string
½ teaspoon Kosher salt and ¼ teaspoon freshly ground black pepper, or more to taste
1 cup dry white wine
3 tablespoons all-purpose flour
4 cups beef broth
3 cups chicken broth
½ cup sherry
½ day-old baguette, sliced ¼ inch thick
8 ounces grated Gruyere
Melt the stick of butter in a large pot over medium-low heat. Add the onions, bay leaves, thyme, salt and pepper and cook until the onions are very soft and caramelized, 25-30 minutes. Add the wine and bring to a boil, reduce the heat and simmer until the wine has evaporated and the onions are almost dry, about 5 minutes. Discard the bay leaves and thyme sprigs.
Add the flour and stir. Reduce heat to low and cook for 5 minutes to eliminate the raw flour taste. Add the beef broth and chicken broth; bring the soup back to a simmer, and cook for 15 minutes. Stir in sherry. Season to taste, with a generous amount of salt and pepper. Taste and adjust seasoning.
Preheat the broiler. Arrange the baguette slices on a baking sheet in a single layer and toast on each side until just golden brown; watch carefully to prevent burning; about two minutes. (May be done two days ahead.)
Ladle the soup in oven proof crocks, ramekins or coffee cups and float two croutes on top. Cover the croutes with Gruyere covering the entire top of the crock as much as possible. Place back in the oven on the sheet pan and broil until the cheese is melted and golden, watching carefully. Place each crocks on a plate. Alert your guests the crock and soup will be very hot.
NOTE: Depending on the brand of broth used, you may end up using more salt. If the broth tastes weak, you can reduce it a bit by boiling in a saucepan until reduced by one third.

Must Read COVID-19 Notice!
COVID-19 Policy: Anyone attending a public or private class must provide proof of being fully vaccinated by emailing, texting a photo of their vaccine card or presenting it on day of class. If unvaccinated, you must provide proof of a negative COVID-19 test within 24 hours of class. Thank you for understanding and stay safe.
Gift a cooking class for the holidays! Buy A Certificate